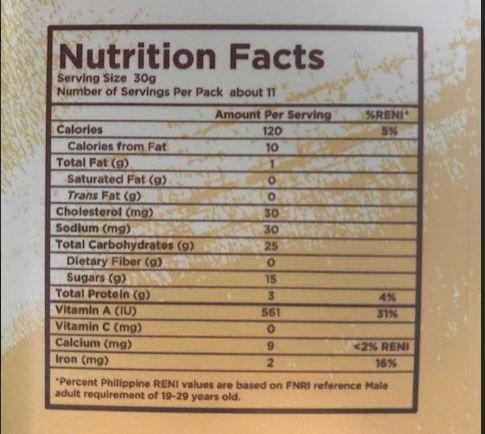 The Department of Health (DOH) has issued an administrative order (AO) that seeks to prohibit, among others, the labeling of food products as “trans-fatty acid (TFA)-free.”

In a forum, Rodley Carza of the DOH Health Promotion Bureau said the agency’s AO 2021-0039 aims to reduce Filipinos’ TFA intake to less than 1% of their recommended total energy intake by ridding the food supply of industrially-produced TFA by 2023.

He explained that industrially-produced TFAs are common in pre-packaged goods like chips and cookies, baked goods, as well as in spreads, butter, and shortening.

The AO prohibits front-of-pack labels that claim a food product is “TFA-free” and requires food establishments to properly disclose the nutritional content of their food products.

(This is because of the halo effect where “TFA-free” labels might lead the public into thinking that a certain food product is healthy where, in fact, it has high amounts of other fats, sugar, salt, or calories.)

Carza said the ban on “TFA-free” claims will be enforced once the Food and Drug Administration (FDA) has issued guidelines and regulations designed to eliminate industrially-produced TFA in the production of food establishments.

The AO also states that the FDA must “determine the appropriate transitory period that shall not be more than two years from the effectivity of this AO in which the FDA will commence regulation of processed food products that have complied with the guidelines set.”

The DOH said studies suggest that there is no safe level of TFA consumption and it has no known health benefit.

“With neighboring countries implementing bans on Partially-Hydrogenated Oils and setting mandatory limits on TFA content in food, the Philippines is vulnerable to dumping of TFA-rich food products in the absence of similar regulations,” it stressed.