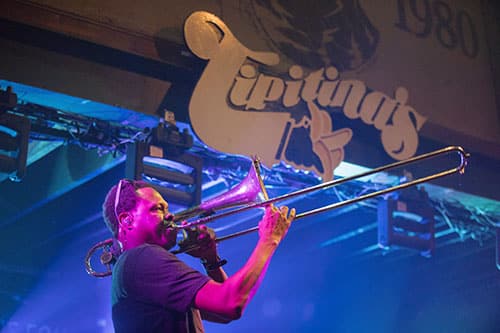 Tipitina’s on Napoleon and Tchoupitoulas in 2013

Legendary local music venue Tipitina’s plans to expand by opening up a coffee shop next door that will also serve as a bar and live entertainment venue at night.

The City Planning Commission approved the plans in a unanimous vote on Tuesday (July 27), with the provision that all music must be indoors with windows and doors closed.

The coffee shop will be on 4331 Tchoupitoulas St., in a building previously used as a commercial short-term rental space known as Tchoup House. The venue has a rear patio and upstairs deck.

The new venue will be on 4331 Tchoupitoulas St., in a building previously used as a short-term rental.

In comparison to the bopping music club next door, the new entertainment venue will be low-key, focusing more on piano and acoustic performances.

“The live music that we are envisioning would be akin to a piano bar: small scale, a piano man, or perhaps a jazz or funk trio,” according to a project description the club submitted. “An intimate vibe, nowhere on the level of size or production that the artists who play inside Tipitina’s require.”

This expansion represents a hopeful new chapter for Tipitina’s, which like all music venues has struggled mightily to survive the pandemic. The club, owned by members of the funk band Galactic since 2018, announced this week that customers must provide proof of vaccination or a negative COVID test to watch shows.

According to Tip’s proposal, the coffee shop would likely be open from 7 a.m. to 2 p.m., and the bar would most likely operate from 5 p.m. to 2 a.m. Wednesday through Saturday and until midnight on Sundays. The owners estimate that renovations to the building will start one month after city approval and take four months to complete.

According to a staff report from the City Planning Commission, Tipitina’s will need to install two bike parking space and submit plans for any exterior lightning for approval by the commission. It must also must submit a noise abatement plan and a security plan to the Department of Safety and Permits, including plans for security cameras.

Tipitina’s informed neighbors of the plans in April and held a virtual neighborhood meeting on May 11, which 18 people attended.

At the time of the meeting, the club was in talks with Hey! Café to run the coffee shop. Hey! Café co-owner Tommy LeBlanc told Uptown Messenger that “all options are still on the table” when it comes to the cafe next to Tipitina’s. The local roaster and café operator ran a pop-up coffee shop out of Tipitina’s until this June.

Hey! Cafe in Tipitina’s in December 2020

Reporter Sharon Lurye can be reached at [email protected].

This story was corrected after posting to reflect that Hey! Café did not open its Lafitte Greenway location in June. It has been the Greenway since October 2018.